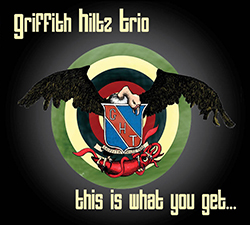 “Both saxophonist Griffith and guitarist Hiltz are economical players whose melodic improvisational approach comes from the pre-fusion / pre-free jazz era. Hiltz’ sparkling, percussive guitar style owes as much to 20th Century icons such as Chet Atkins and Les Paul, Danny Gatton, and Jim Hall as it does to any number of present-day jazz guitar stylists. It’s as much of a surprise when he goes for some gnarly distortion on the title track, as it is when he whips out a banjo for his solo on “Strawman.” Griffith has an easygoing, mellow sound that owes much to players such as Paul Desmond. “The Rainbow Connection” proves Griffith to be an extremely fine bass clarinetist, with a rich, dark sound. Sly Juhas’ drumming is right in the pocket; never too busy but never too passive.”

Dan Bilawsky – All About Jazz