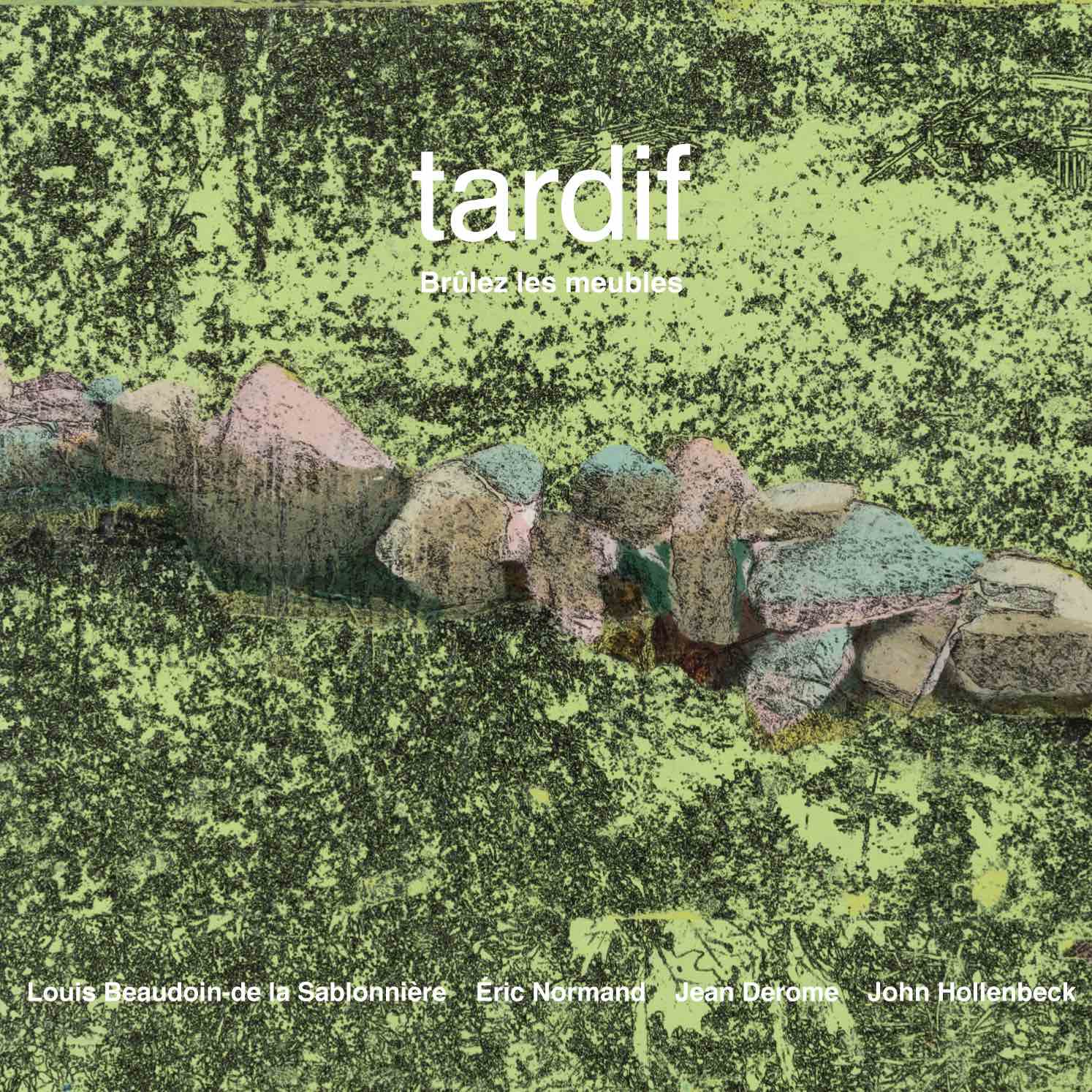 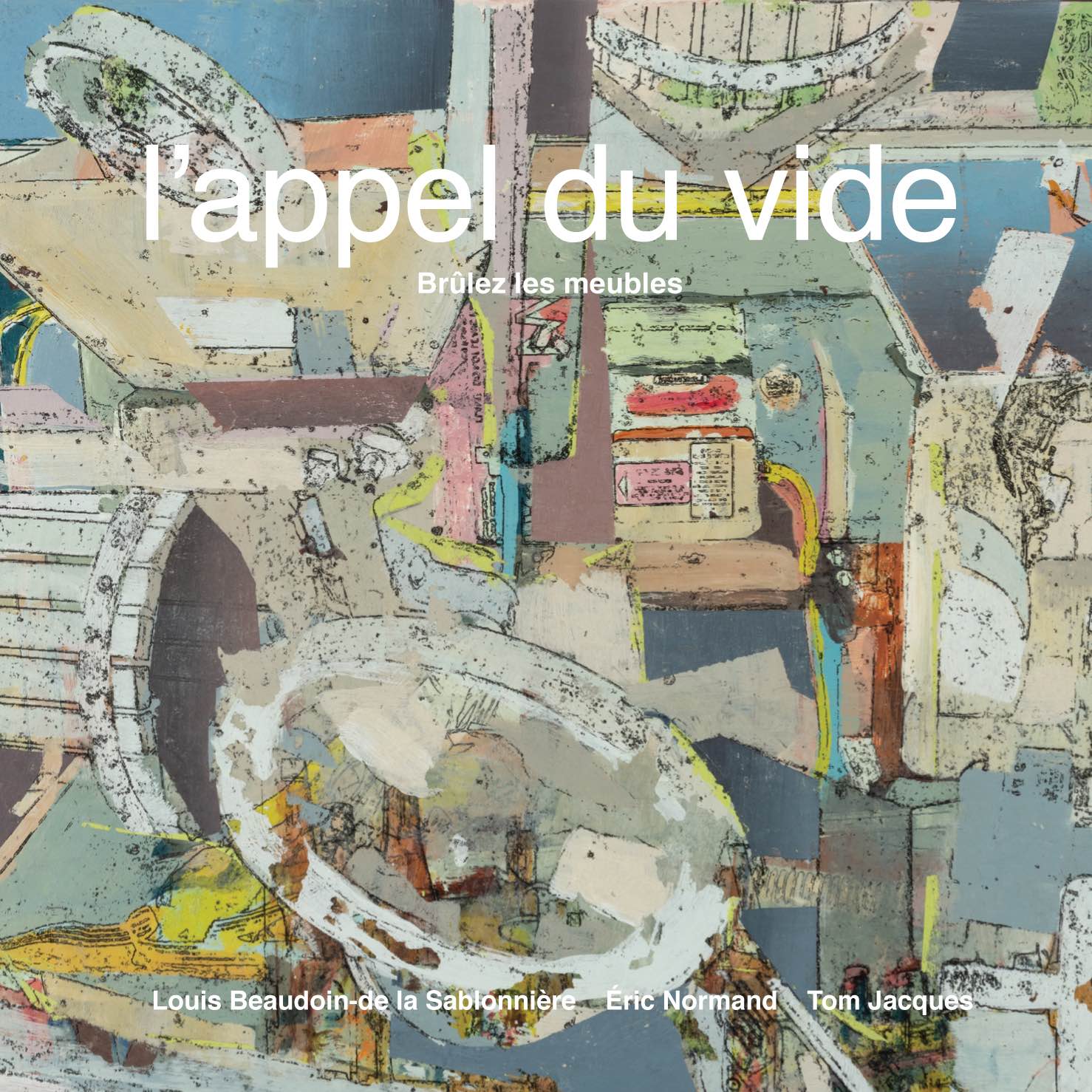 Brûlez les meubles is a two-headed musical project conjured up by Louis Beaudoin-de la Sablonnière and Éric Normand – two of Quebec’s leading improvisers. Éric and Louis have known each other for many years, and have long shared a mutual interest in each other’s music despite their different artistic backgrounds (and the fact that they live more than 500 km apart.) In addition to their musical kinship, the two composers are both record aficionados with a shared passion for contemporary jazz. Every time they gather, they invite a different group of musicians to explore their musical universe with them, giving life to new batches of compositions prepared during the months in between meetings.

Brûlez les meubles has seen the likes of Jean Derome, Alexandre Robichaud and Félix Hamel pass through its ranks, in addition to drummers Tom Jacques, Louis-Vincent Hamel and John Hollenbeck.  This music is abstract, meditative, and both modern and simple, nourished by a shared passion for the legends of jazz guitar, from Jim Hall to Bill Frisell, and from Rene Thomas to Brandon Ross.

In the fall of 2022, the group will release 2 albums: Tardif, a quartet with Jean Derome (alto saxophone and flute) and John Hollenbeck (drums); andL’appel du vide, a trio with Tom Jacques (drums)

John Hollenbeck focuses extensively on composing for and leading the critically acclaimed Claudia Quintet and his three-time GRAMMY-Nominated Large Ensemble. Hollenbeck has received numerous awards and commissions, including a Guggenheim Fellowship, the ASCAP Jazz Vanguard Award and the Doris Duke Performing Artist Award. He is well known in new-music circles for his longtime collaboration with Meredith Monk and has worked with many of the world’s leading musicians in jazz including Bob Brookmeyer, Fred Hersch, Kenny Wheeler  and Tony Malaby

One of the most active and eclectic musicians on the Canadian creative music scene, Jean Derome has earned the recognition of a larger public, a rare feat in the world of new music. Thanks to his large-scale musique actuelle projects, his compositions, his work as an improviser, his jazz groups and his music for the screen and the stage, Derome ranks as a major creative force, in Quebec and abroad. Ever since his work with Nébu (one of Quebec’s first avant-garde jazz groups) in the early ‘70s, Derome has been consistently renewing and diversifying his approach of composition. In the early ‘80s, he co-founded Ambiances Magnétiques, an artists’ collective and record label that both raised his profile at home and introduced his name to the outside world. Derome has also shared the stage with several musicians of international stature, among others Fred Frith, Lars Hollmer, Louis Sclavis and Han Bennink.

Tom Jacques is a multi-instrumentalist and sound artist. His work evolves between composition, improvisation, performance and sound device design, mainly in musique actuelle, contemporary music and jazz. For the last 8 years, he has been working with various artists and technicians in order to make his own musical instruments and sound installations. This approach allows him to explore unique musical universes that are unattainable with conventional instruments. Tom Jacques stands out among Quebec’s new breed of creative artists. Many of his personal projects and musical ensembles have been acknowledged and supported by the Conseil des Arts et Lettres du Québec through its Bas-Saint-Laurent arts and literature program and its Bas-Saint-Laurent territorial partnership program.